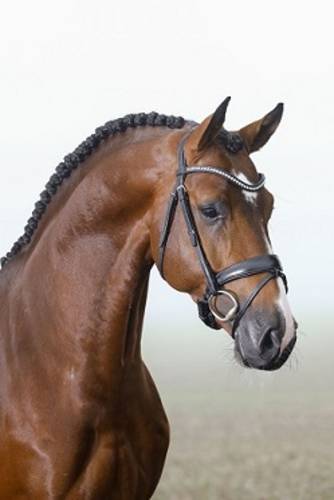 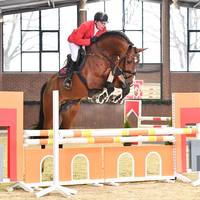 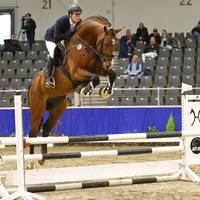 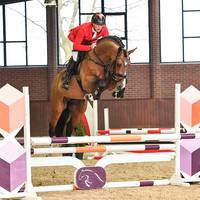 With the characteristics of an important sire Baggio knows how to impress his observer. Long legs combined with an extremely modern type form a symbiosis with a body that is able to act in every situation with plenty of power. Taking into consideration that Baggio is a show jumper, his movements can be qualified as extraordinary. His trot is always swinging with bend of the haunches while his uphill ground-covering canter seems to be nearly perfect. When Baggio starts his loose-jumping demonstration or does his first jumps under the saddle, he even knows to exceed all expectations. Very cautious, he’s the master of every situation and is scope is just. After succeeding in his 14-day test in Neustadt/Dosse in 2019 (final jumping score: 8.40) we expect his first crop in 2020.

The sire Brantzau, son of the Olympic horses Baloubet du Rouet (Rodrigo Pessoa) and Carthago (Jos Lansink) from the successful Holstein line 104a, is highly attractive in view of his top performance traits. Born in France, he moved to Germany as champion stallion of the stallion licensing in St. Lô, and won youngster classes with scores up to 9.3 in series and, in the meantime, performs brilliantly in international youngster tours.

There’s no more important Holsteiner sire alive than Baggio’s dam’s sire Casall. With Rolf-Göran Bengtsson (SWE) he jumped several championships and took the win in many 5*-Grand Prix. There are 265 Casall-offspring succeeding at 1,40m-level and more only in Germany. At the moment, Casall is found in third position of the WBFSH-ranking of show jumping sires. Casall is followed by Concerto II in Baggio’s pedigree. Concerto II who deceased too soon has spent just three breeding seasons in Holstein. Nevertheless, he turned out to be one of the best sons of the important Contender. He produced many international show jumpers who won more than one million Euro in the jumping-course.

Baggio’s dam U-Charlotta is half sister of four internationally successful show jumpers and originates from the appreciated Holstein line 503 having delivered Livius, the once-in-a-lifetime horse of the German Peter Luther.