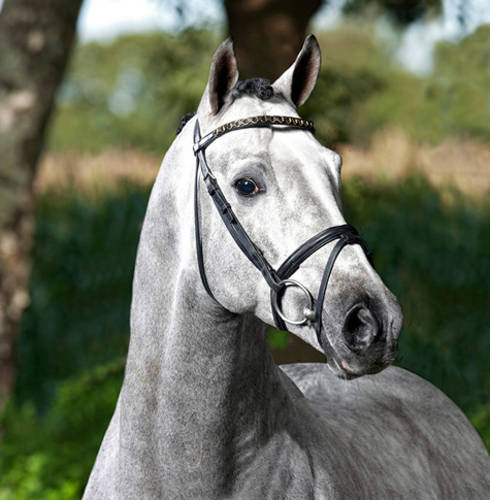 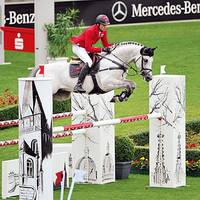 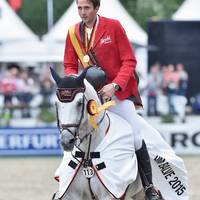 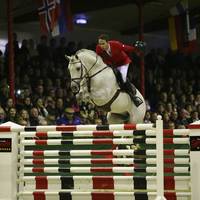 German Champion in 2015! The dream team DSP Cashmoaker and Denis Nielsen brought the championship title from Balve to Sprehe stud after an exciting finish and they had a super run also at other venues in 2015: They placed second in the grand prix of Linz (AUT), there, another third place in the Nations Cup, then, third again in the grand prix of Lanaken (BEL), second in the Riders Tour ranking in Hagen a.T.W. and second in the grand prix of Viegeln. These successes were the foundation for the award “Stallion of the Year 2015” - he received the award formally in a ceremony on the occasion of the “Schaufenster der Besten” in his home region Neustadt (Dosse). Also in 2016, he was again internationally successful: He won the grand prix of Herning and convinced, among others, in Lanaken, Ommen, Sopot, Hamburg, Balve, Münster and Dortmund. In 2017 he continued his series with several achievements in Nations Cups and top placings in Barcelona, Samorin, Donaueschingen etc.

DSP Cashmoaker is a brightly shining appearance with a type and aura that set him apart, this in combination with a body that is in perfect harmony. His talent for jumping is awesome and make jumper experts look twice. With such an outstanding technique and amazing bascule, this stallion doesn't seem to have any upward limits. DSP Cashmoaker passed his 70-day test in Prussendorf, leaving this venue as winner.

Several of the foals from his first crops received premiums in different breeding areas. In 2013 his first son was licensed in Munich-Riem. At the 2015 Elite Auction in Vechta, an only three-year old daughter was sold to Peter Wendeln as price highlight among the show jumpers due to her phenomenal jumping qualities. In 2016 and 2017, several offspring qualify for the Bundeschampionat of young show jumpers in Warendorf. Furthermore, Cash and Fly won a medium (M) level test for young show jumpers with a score of 9.0.

His sire Calido I gave prove of his own sportive qualities as striking winner of the jumping index at his stallion performance test in Adelheidsdorf in 1994 as well as with numerous wins in tests for young show jumpers and by participating successfully twice in the Bundeschampionat. Calido I is the most influential son of the famous Cantus from the breeding point of view. He produced top horses in series, over 70 licensed sons, countless state premium mares and more than 270 advanced (S) level show jumpers. All Cashmoaker's full siblings were championship foals. His full sister Cherry Pie is currently highly successful in advanced (S) level show jumping.

The full sister of the dam, State Premium mare Louisiana, placed several times with the best in advanced (S) level show jumping classes under the breeder's son Hauke Timmreck. The dam's sire Lafitte, bred in Bavaria, began his breeding career in Oldenburg but was later stationed for many years at the Brandenburg State Stud in Neustadt/Dosse where he also competed in show jumping, winning advanced (S) level tests. One of his licensed sons, Lalique, won the 2003 Brandenburg main licensing. The granddam Lagune produced quite a few jumpers, e.g. by Lafitte, Azarro and Continue, that won ribbons up to advanced (S) level. Lear, a chestnut stallion found in the third generation, sired mostly show jumpers, among which were also his two licensed sons, Leduc (private stallion Saxony-Anhalt) and his full brother Luchs (State Stud Redefin) who, just like Cashmoaker, can be assigned to the line of Teichrose (by Packeis) that is at home in Saxony-Anhalt. The great granddam Koralle is the dam of two internationally successful show jumpers, La Coquette/Lars Nieberg and Rulanda, with whom Imke Harms became the 2005 German Champion in the class for women. The significant gray stallion Kolibri, bred in Mecklenburg, who rounds the pedigree off, is sort of a symbol for horse breeding in Saxony-Anhalt. Kolibri earned a reputation as a first class jumper-maker. 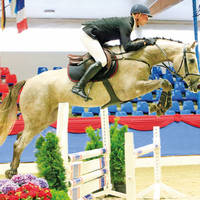 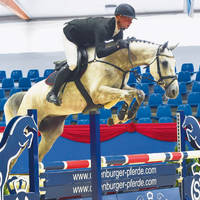