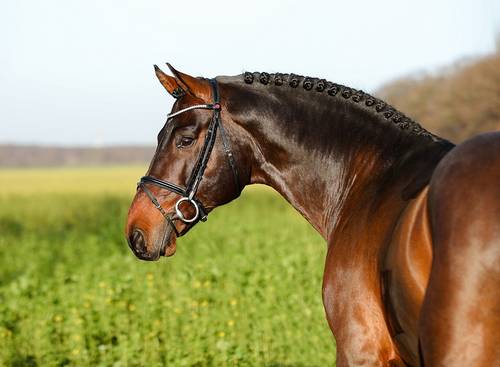 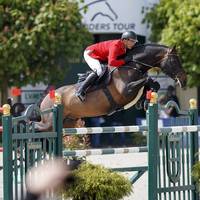 Cumberland, appearing in breeding in 2020 for the first time, is an internationally successful son of the legendary Calvaro Z. The true to type stallion inspires not just with his obviously well-muscled body, but also with his outstanding jumping-ability and his energetic, sporty canter. After his licensing in Vechta in 2010, Cumberland’s focus was on sport only: He began with qualifying for the Bundeschampionat several times, then, he took hold in the international show jumping scene under the Sprehe brothers. Under the saddle of Jan Sprehe he was often listed as winner in international classes up to 1.55 m level at the age of nine. In 2019, he gave prove of his willingness to perform by collecting more ribbons internationally.

Cumberland’s talent is not a matter of chance: His Holstein sire Calvaro Z was a world-class show jumper under Dr. Michael Rüping, Jos Lansink as well as John and Michael Whitaker. In breeding he influenced decisively all European show jumper populations. Calvilot (Andreas Kreuzer), Night Train (Darragh Kerins), Katchina Mail (Patrice Delaveau) and L.B. Callas Sitte are just a few of his most successful offspring. As one of only two licensed sons of Calvaro Z in Germany, Cumberland is particularly important for breeding.

Cumberland’s dam Ferina is a daughter of the trademark stallion Landadel, who, just like Calvaro Z, produced exceptional horses in series (Fein Cera, Lucie, Lady Weingard and many others). Both Ferina and Cumberland’s half brother Al Capone (by Azarro) could place with the best in advanced show jumping classes. Fürst Ferdinand, Gotthard, Lasso and Agram, who are all timeless heroes of Hanoverian show jumper breeding, follow in the line of ancestors. The Hanoverian line of Freigebiet is a performance line which is known for licensed stallions such as Freiherr, Fürst Agram and Goldschläger Z, but also top show jumpers such as Aquila HDC (Patrice Delaveau), Clintissima (J. Patterson-Robinson), Zeke (Jenna Thompson) and the OS-champion mare Walmeria (Pius Schwizer).