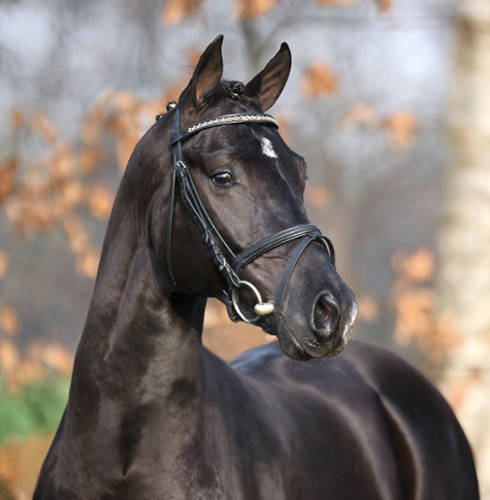 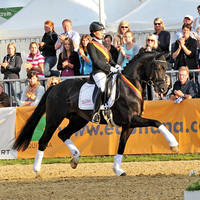 What a career: He was a premium stallion of the Westphalian licensing in Münster-Handorf in 2008, the 2010 Bundeschampion of four-year old stallions as well as the radiant and highly applauded Bundeschampion of six-year old dressage horses in 2012. In the meantime, he has placed with the best many times at St. Georg level under Kristina Bröring-Sprehe. Blessed with a flawless exterior, he is distinguished by well over average gaits, striking trot mechanics, a ground-covering walk and a canter with fabulous transmission.

Fürst Fugger passed outstandingly his 30-day test in Schlieckau at the end of 2009. With a weighted score of 8.94 in dressage, he placed second in a field of 40 competitors from all over Europe and also ranked in the top group overall at the end of the test. Whenever he competed in tests for young riding horses or dressage horses, he made a victory out of it almost exclusively!

His offspring have dark coats, are expressive and have a good step off. Many of them have received a foal premium in the different breeding areas. They had their successful debut in sport with victories and high placings in tests for youngsters, therefore, they made Füst Fugger a shooting star in FN's predicted breeding value statistic: Fürst Fugger established  among the top 1% of all German sires with 159 points. By now, three sons were licensed , including Faszination Pur.

Fürst Fugger is clearly a son of his sire Fürst Heinrich. He was the 2001 Champion Stallion at this 30-day test, Champion Stallion of four-year old, main premium stallion on the occasion of the Oldenburg licensing in 2002 as well as celebrated World Champion of five-year old dressage horses in Verden in 2003. Within just a few years he became an absolutely extraordinary sire with more than 40 licensed stallions and more than 100 state premium as well as Verband premium mares. In addition, he presented two Oldenburg Champion Stallions named Van the Man and Fürstenball.

The dam Piroschka produced several successful sport horses. The dam's sire Weltmeyer was himself celebrated Bundeschampion, licensing and stallion performance test winner as well as DLG-Champion. Due to his enormous significance, proven by more than 100 licensed sons, he is one of the most influential stallions of the past 30 years. When bred to the Thoroughbred Hill Hawk xx, the granddam Pepieta produced also the daughter Hella, who delivered Don Hill when bred to Don Gregory. Pik Bube II is found in third generation. The esteemed full-brothers Pik Bube I and II have always stood out with their especially versatile inheritance and presented both dressage horses and show jumpers for international classes. Fürst Fugger originates from the Hanoverian mare family 301/Elfenblume (by Elimar-Schutzwart-Schwabenkind-Neujurist). This family is also known for the licensed stallions Leader (State Stud Dillenburg), Rautenstein (State Stud Schwaiganger), Rosetti (private stallion Bavaria), Rouge Diamant, Schow Men (private stallion Hanover) and Syndikat (private stallion Oldenburg, Mecklenburg) as well as the internationally successful show jumpers Grannusch/John Whitaker and the dressage mare Royal Gala/Laura Pytkowiat, who competed successfully in the German Championships. 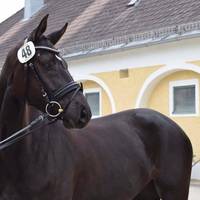 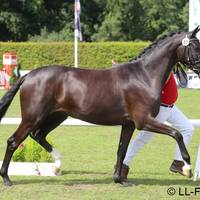