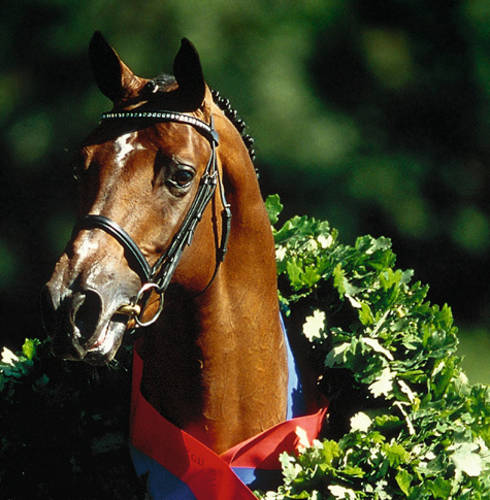 The first-class main sire Quidam's Rubin left the breeding stage much too early. At his 30-day test in Prussendorf in 2002, Quidam’s Rubin received the maximum possible score of 10.0 for his jumping ability, a salute to his ancestors. In 2004 he won novice (A) and elementary (L) level tests for young show jumpers and in fall of that year he left his 70-day test in Neustadt/Dosse as undisputed victor. In his specialty, show jumping, he received the highest possible score of 10.0 several times. In just a few years he had been able to firmly establish himself in the upper league of German jumper-makers. Quidam's Rubin had been in breeding at the Sprehe studfarm from 2002 to 2007 and then died unexpectedly. He produced numerous highlights at foal shows and championships as well as highly paid candidates for diverse auctions. In 2003, the Oldenburg Verband awarded him the I-a main premium in the lot of stallions with emphasis on jumping. Today, he can refer to 30 licensed sons (including Quaid I and II, Quidamo, Quinnus I, II and III, Quidam Blue, Quidam Cento, Quintessenz, Quite Rubin and many others) of whom many have been awarded a premium. He also presented licensed sons, which have been produced with frozen semen. His licensed son Quaid won the class for five-year old show jumpers at the Bundeschampionat in 2009. The many other offspring that have competed at the Bundeschampionat in Warendorf underline his worth as sire. No fewer than 202 offspring are meanwhile successful in advanced (S) level show jumping and earned more than 1.75 million Euro in prize money; special mention deserves the internationally winning horses Quamina/Mario Stevens, who is also dam of Cola Zero, Questa Vittoria/Thomas Kleis and Quidam’s Cherie/Jörne Sprehe.

His sire, Quidam de Revel, competed in the 1992 Olympic Games in Barcelona, winning team bronze and finishing fourth individually under Hervé Godignon/FRA. As of 1993, he won, under the saddle of the Danish Thomas Velin, competitions such as the Grand Prix of Hanover and Arhus/DEN, but also set standards in breeding like no other: ten offspring of Quidam de Revel participated in the 2002' World Championship in Jerez, Spain; thereunder the later gold medalist Dollar de la Pierre (alias Tlaloc M) with Reynald Angot/FRA. His dam Helvecia (sport name: Lamante) was successfully ridden in advanced (S) level show jumping by Uwe Deyle. The offspring of the dam's sire Landgraf I have won more than 4.48 million Euro in sport, making him one of the best jumper-makers in the world. The granddam Betty produced several successful medium (M) level show jumpers, when bred to different sires. She is half-sister of the licensed Lord son Lionheart (private stallion Thuringia, advanced (S) level show jumping). Caletto I, who appears in the third generation, was one of the most successful international show jumpers in the 80s with Dr. Michael Rüping. Through Farnese and the Ladykiller xx son, Leander, the earlier ancestors go back to the proved Thoroughbred sire, Frivol xx, who is still found today in many successful lines. Line 144 is also the origin of the licensed stallions Carpino (private stallion Holstein) and Covrage (private stallion Denmark).